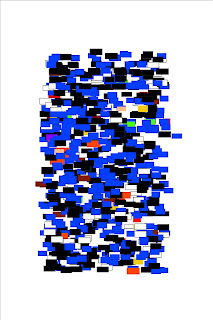 A "Ghost"-writer is employed by fiction publishers for several reasons. In some cases, publishers use the "Ghost"-writer to increase the number of possibilities or variations that can be offered by a single book. In others, the "Ghost"-writer is used to deplete fiction from well-known works, from "name" authors in genres such as detective fiction, mysteries, and cryptic novels.
Some critics have recently assumed that the purported author of the New York Trilogy series, "Paul Auster", is actually a pseudonym for a series of "Ghost"-writers who write books in
different styles using a template of basic information as a source of systematic composition.
Some recent "Ghost"-writing, as observed here, also known as local-colour making, consisted in literally translating characters' names into their visual appearance and, at the same time, extracting all fictional indicators, erasing actions, movements, feelings that are expected in the book. Blue became blue, Black became black, Gold became gold, Brown became brown, Green became green and White actually invaded, saturated the entire book thus turning the original story into a backdrop for stable and strongly differentiated characters and, at some point, seemed like an attempt at defying the laws of the blank page syndrome.
Throuh the actual colour-coding which was taking place / space in this piece of work, the "Ghost"-writer was also attempting to render the actual process exposed in the original work which was stated as follows: "His method is to stick to outward facts, describing events as though each word tallied exactly with the thing described, and to question the matter no further. Words are transparent for him, great windows that stand between him and the world, and until now they have never impeded his view, have never seemed to be there" (page 174). So these are the words that the reader will not capture as words have vanished into unwriting: all that is left is a series character-events which take possession of the emptied space and inhabit it with their ghostly and undecipherable presence. This renewed space is unveiled by a ghost-writer known as Derek Beaulieu.
Publié par Roland Bartleby

Experiments in writing:
Constraint, concept, authorless writing, free style and self-generated textual materials.
Most of the time, I do not produce, I let things happen.
Follow @Zswound